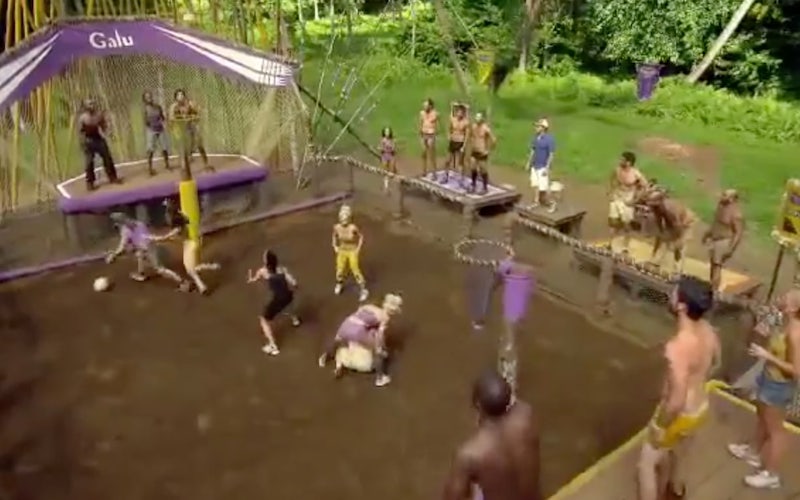 Three days after we rehearsed Schmergen Brawl, the reward challenge on last night’s episode, Luna, the proprietor of our hotel Le Manumea, looked at me and said, “You’re damaged.” Then she said, “You’re all damaged.” We were.

I got away pretty easily: torn-up and scraped-up knees and elbows, big bruises on my arms and legs, and an index finger that was injured and jammed enough so that I couldn’t really type with it or open a bottle of water for days, and it still hurt months later.

Three days after the rehearsal, my entire body was as sore as it was a few days after running a marathon. Did I mention rehearsing Schmergen Brawl was fucking awesome?

Probst told me that Schmergen Brawl:

“is going to be an instant classic. It will be a classic that we will repeat at some point because it’s a classic, and it’s a really simply game that our grips department created.

They were bored and drinking beers one day, and said, ‘What if we threw balls like this and we kicked balls like that, and you got points’? And it became a challenge.

That’s part of the fun of this show, and the pride the grips will have knowing they created that challenge and it’s now on the show is enormous.”

While we were waiting for the rehearsal to start (for Probst to show up, ahem), one of the grips said the challenge changed somewhat from their initial conception, but that’s typical for any challenge.

The arena and its bamboo was spectacular. The ground, by the way, was initially described to us as mud, but since there was no rain before our rehearsal—or the actual challenge—it was dirt, and dirt with an endless supply of rocks.

The Dream Team walked around picking up the bigger rocks at first, but new ones kept appearing, and as many as we picked up, more appeared. Falling on those was not fun.

In any case, they gave us a good beating, and while they won the first game, we won games two and three, meaning overall, the press prevailed. Again.

But the Dream Team put up a good, fair fight, and they’re totally awesome people who I’d gladly try to punch in the face any day.

I’m not exactly the brawler type, but in these challenges, I get super-competitive, perhaps as a way to make up for a childhood of avoiding physical competition whenever possible. And there’s no way I was as aggressive as Selene, the CBS publicity camera operator who really brawled—and felt it, too. She bruised her rib, which she discovered upon return to the U.S.

Unlike Selene, my general strategy was not to throw myself into the initial pile-up, but jump in a second later and grab for the balls the other team managed to get. (They were rugby and other balls covered with a very hard layer of paper mache, basically, and not easy to throw)

After that, I’d focus on rebounding, getting rid of the ball as soon as possible, before some behemoth of a Dream Teamer would throw me to the ground. In later rounds, I jumped on someone’s back and he just swung around with me there. A female Dream Teamer almost kicked me in the face.

I forgot someone’s advice to go for the legs, which may have been helpful or may have just gotten me actually kicked. At one point, I was wrestling a female Dream Teamer for a ball and the crew started mocking me.

We lost the first game, and while the camera crew packed up, Kirhoffer, Probst, and other producers talked, modifying the rules based upon what they just saw.

We played again. Honestly, I don’t recall exactly what changed when, but at one point—perhaps the first game—there were fewer and fewer balls each round, which left us all to go after the same one, which didn’t work well.

Although some members of the press and Dream Team swapped in and out, there was no formal rotation, perhaps just because there weren’t enough of us.

After brawling for three back-to-back games, I was once again struck by how difficult these challenges are, and could not imagine returning to a tribe camp that dirty, tired, and injured, and having no water or food or shower or clean clothes, and maybe even having to strategize to vote someone out. The men and women who go on this show and do these things deserve some praise.

But not Ben. He just deserves our eternal scorn and loathing, and not just for making show history by kicking Russell Swan in the back of the leg and getting thrown out of the game after Jeff Probst warned them not to try “anything resembling a cheap shot.”

Ben later tried to call Probst out on that, saying he didn’t know they were “playing by your sissy rules.” Lucky for him they weren’t playing by Thunderdome rules.

There’s a few seconds of footage from our rehearsal in the TV Guide Channel’s season preview.