After less than 48 hours of recovery time, CBS transitions from its craptastic summer reality shows to its gold-standard series: the return of The Amazing Race a week from Sunday, and the debut of Survivor Samoa tonight.

In case you missed the non-stop barrage that was the series of 20 cast member interviews I wrote and posted over the past few weeks, I’m covering the show for three other publications and media outlets, making sure those 22 hours of air travel were worthwhile.

First, I previewed the season for msnbc.com, and in that story, Jeff Probst tells me why he thinks it’s fair to force a leader on the tribe who’s required to make significant decisions.

“One some level, everything about Survivor is artificial. And it really doesn’t matter if we instigate the conflict or not, you have to deal with the repercussions,” Probst told me. Read the story for more. 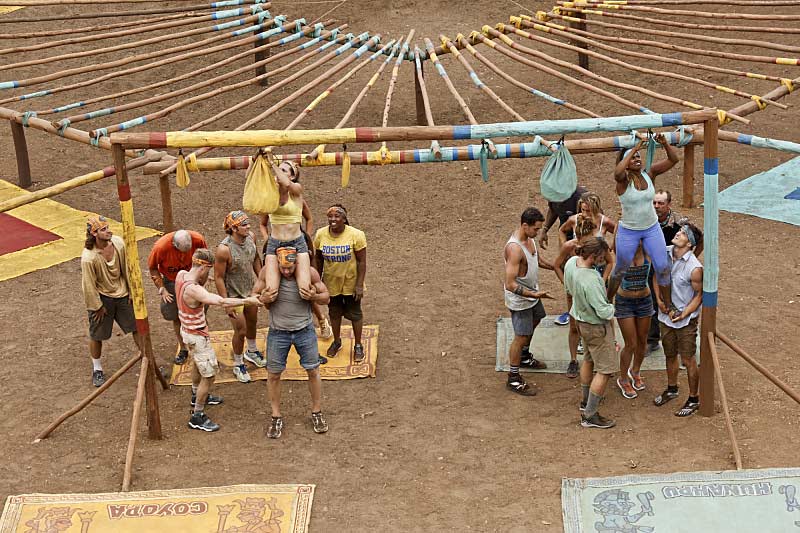 In Metro, I look at the impact the location is having on the crew. In short, it’s spectacular compared to the last two extremely brutal and isolated locations, Brazil and Gabon.

And finally, for NPR, I did a story about the construction of the challenges.

The challenge team’s work is pretty amazing, especially when you compare it to other reality series (Big Brother, ahem).

As with any story, time and other constraints prevented me from including everything, so the Dream Team is only mentioned in passing, and production designer Dan Munday, who works side by side with challenge producer John Kirhoffer, also didn’t make the cut.

Munday is the guy who creates the show’s incredibly intricate puzzles, and executive producer Dave Burris told me that Munday is “a mathematical genius” for his ability to fabricate them.

Munday works alongside Kirhoffer—after he designs the show’s overall look and feel, including Tribal Council, with another production designer.

Both men are “geniuses” and “just brilliant guys,” Probst told me.

‘Survivor’ villain promises to destroy own food [msnbc.com]
Two seasons in Samoa not too shabby for a ‘Survivor’ [Metro]
‘Survivor: Samoa’ Rises To A Season Of Challenges [NPR]
564 shares