A contestant who left Hell’s Kitchen three weeks ago was seen working in the kitchen for a few seconds during Tuesday night’s episode. Gordon Ramsay eliminated Tek in the fifth episode, but last night, when he was screaming at Amanda, Tek was there in the background, working calmly: 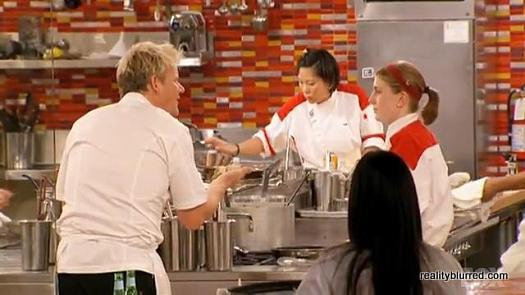 In that moment, Ramsay screams, “Amanda, they serve fish more cooked than that in a fucking sushi bar,” and Tek is clearly visible, as alert reader Matt noticed, along with others on Twitter. Since she’s not in any additional shots, it’s pretty obvious the editors just needed more anti-Amanda footage to make a case for her eventual elimination. And since the show has pretty much cast reality aside in recent seasons–last season featured Jean-Phillipe dropping a cake in the most obviously fake way possible–I’m sure they assumed no one would notice and/or care.