I gave up the now-cancelled/on extended hiatus Best Week Ever for E’s The Soup a while ago, and now I know why: Joel McHale’s dissection of popular culture is awesome, even in graffiti.

Backstage at The Tonight Show with Conan O’Brien, guests sign a wall after their appearances, and those signatures reveal a lot about the person who signed it. Tom Hanks, for example, has a small, understated signature underneath first guest Will Farrell’s massive signature, in which John Mayer wrote in one of the cursive looped Ls something like, I’ve always wanted to be inside Will Farrell. (There’s a slideshow of signatures on The Tonight Show’s web site, and as a bonus, they’re high-quality photos instead of crappy cell phone ones.)

Among the recognizable/readable signatures I saw while backstage at the Tonight Show yesterday–special guest, Heidi Klum, who said nothing substantive about the new Project Runway–were three belonging to reality TV-related guests, and they exemplified three general trends:

Some people think they’re more amazing than other people, and thus make their signature bigger or bolder than others. For example: 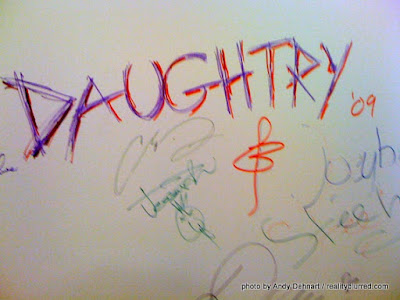 The wall has has already become a living memorial, sort of. Billy Mays appeared on the Tonight Show five days before his death in June: 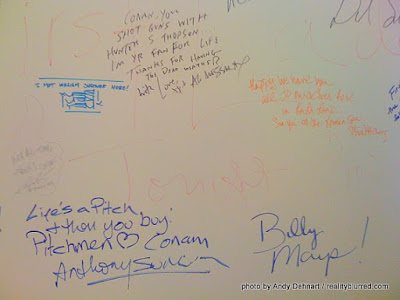 The best ones use their space to make a contextually appropriate and witty joke, and none of the signatures I saw did that better than Joel McHale’s, which is written maybe seven feet up on the wall: 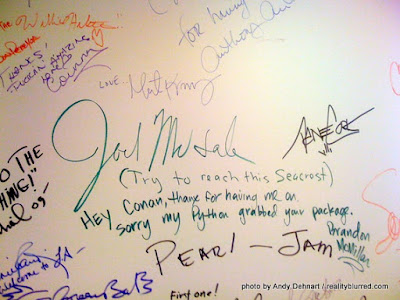