Last night, for the first time ever, all seven American Idol winners appeared on stage together, and although that stage looked identical to the show’s set, it was actually the reproduction at Disney’s Hollywood Studios theme park in Orlando, Fla., at the new American Idol Experience attraction.

The seven winners were introduced after David Cook and Carrie Underwood sang individually and then performed a duet. Six of the finalists–Ruben Studdard, Fantasia Barrino, Carrie, Taylor Hicks, Jordin Sparks, and David, along with plenty of non-finalists, from Sanjaya Malakar to Ace Young, Mandisa to Diana DeGarmo–worked a red (well, blue) carpet at the theme park before the premiere, but Kelly Clarkson was notably absent. She showed up on stage, though, and apparently left immediately following her appearance. (A picture of them is below; the guy on the left is fake Ryan Seacrest with the theme park guest winner, while actual Ryan is on the right.)

Although it’s been in a soft-launch preview for a while now, the attraction officially opens Feb. 14, and allows park guests to attempt a two-stage audition process. Those who make it through get to perform on the faux set with faux judges, and the audience votes. Daily winners receive a pass that lets them skip actual American Idol audition lines, although it’s not clear at what point they’ll enter the real audition process.

The reproduction of the set is so real that David Cook mentioned beforehand that he almost fell off the stage, expecting there to be stairs where there were none. During the actual performances by theme park guests last night, the American Idol Experience felt incredibly authentic, like being in the show’s L.A. studio. Everything from the lighting to the camera work on the video monitors has been faithfully reproduced with Disney’s legendary attention to detail. There are even montages (including of the winning seven winning moments from the finales), bio segments on some of the performers, and even Coca-Cola cups on the judges’ table.

“Anybody who gets a chance, absolutely do it. This is, bar none, one of the closest experiences you’re going to get to being on Idol,” David Cook said on the red carpet, as fans behind him screamed for him–and for David Archuleta, whose creepy dad was in the audience sitting next to him, although not on the red carpet.

While watching mediocre to great singers perform well-known songs is more than reminiscent of the actual televised competition, there is one major difference: lyrics appeared on a massive teleprompter in the back of the room, although it’s probably just as a back-up, since none of the five who performed during the premiere last night appeared to use it.

The attraction’s real problem is the judges, who are pseudo-stand-ins for the show’s actual judges, complete with an acerbic British man. However, they all regurgitate obviously scripted lines that correlate with whatever song was just performed–contestants have a list of Disney and popular songs to choose from–and thus their time is limp. That’s kind of a structural problem: Disney won’t ridicule or mock its own paying guests. Also, the judge in the Randy Jackson chair (there are three judges, no Kara facsimile) kept calling the contestants “boo boo,” which was odd. Somehow, I think audio-animatronic versions of the judges repeating their catchphrases would have been better.

The host does an acceptable job, although the warm-up act was funnier, and the host was only notably entertaining last night when actual Ryan Seacrest came out and mocked himself by mocking that guy, at one point running his fingers through the attraction’s host’s hair and saying, “product, please.” When Seacrest first came out, he said, “Couldn’t they have gotten a bigger guy?” Paula Abdul attended, too, to give some teleprompter-fed advice to the performers, and to joke with Seacrest that the set seemed friendlier (because Simon Cowell wasn’t there).

Season one runner-up Justin Guarini appears in the pre-show video for the new attraction, and is also co-hosting American Idol Extra on Fox Reality this season, never mind video blogging about it. I asked him if he had any hesitation about continuing his association with the series or wanted to get away from it, and he said, “It’s kind of a double-edged sword, really, American Idol. At first, I think, everybody when they get off the show feels like, I need to get away from American Idol,’ but those of us who like to work, make sure that we always keep it as a facet of our career. It’s not something to run from; it’s an amazing brand. And I’m proud to be part of it; always be proud to be part of it. And now I get to be a permanent fixture here in Disney, so it’s an honor.”

As to being in the pre-show, he said that “was awesome. … I’m virtually hosting the pre-show and joining the ranks of people like Gary Sinese and other people who get to do that here in the parks, so the exposure alone is worth it, not to mention to supporting a brand that has given me my career.” Searching for exposure and work: That may be the true American Idol experience. 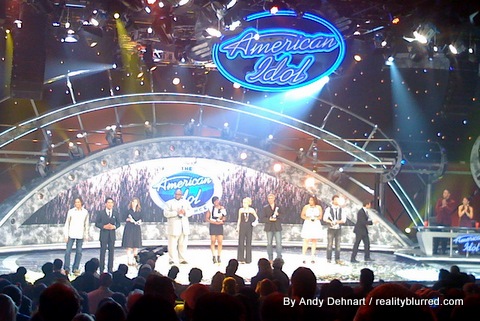