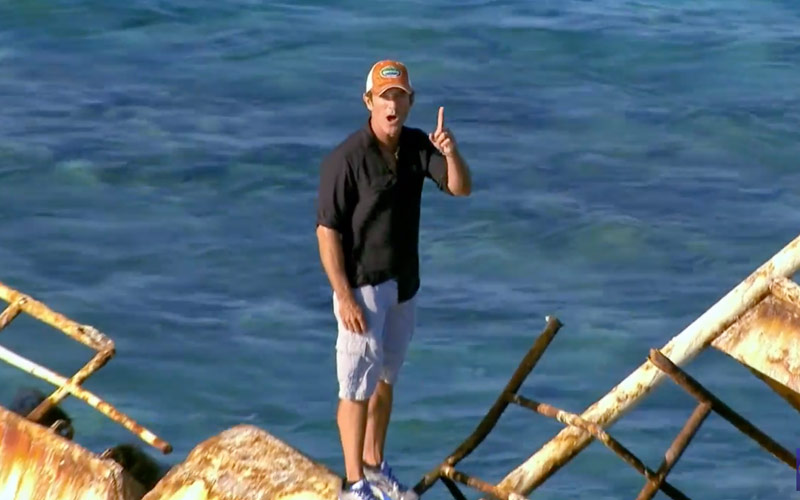 At the 60th Emmys last night, Survivor host Jeff Probst was named the first-ever outstanding reality show host, while The Amazing Race won its sixth consecutive Emmy last night, even though its fifth Emmy was absurd.

Probst’s win–which he completely deserved as the person who defined what it means to be a reality show host–balances out the injustice of yet another TAR win.

In his speech, reproduced at the end of this post in full, Jeff said, “This has been a great experience for all of us, and we really feel honored to be a part of this family. Thank you for letting reality in.”

He also thanked “the Survivor family that I work with: Year in and year out, all over the world, we are a traveling band of gypsies, thank you for making me look good enough to warrant one of these. I share it with you.”

It’s ironic that the consistently best part of TAR, host Phil Keoghan, wasn’t even nominated in his category.

Anyway, the CBS series defeated American Idol, Dancing with the Stars, Project Runway, and Top Chef–never mind that the category should have included other shows that had stellar years, such as Survivor.

Apparently, Emmy voters can’t bring themselves to actually watch the series they vote for, so they just keep voting for the show that won before, even though that show is far less entertaining than it used to be, and is up against shows that had strong seasons and which, quite honestly, deserve recognition more than it does.

The Emmys were hosted by the reality host nominees, although they didn’t really host so much as bombed.

The hosts, who besides Jeff included Dancing with the Stars‘ Tom Bergeron, Project Runway‘s Heidi Klum, Deal or No Deal‘s Howie Mandel, Survivor‘s Jeff Probst, and American Idol‘s Ryan Seacrest, were introduced by Oprah for no particular reason, and their opening bit was awful, as it simply featured the five hosts talking over each other about the fact that they had nothing planned and nothing to say.

Heidi Klum was silent until everyone except Tom Bergeron and William Shatner stripped off her tuxedo to reveal a dress. Not funny, moderately offensive, and utterly pointless.

Backstage after his win, Jeff told reporters that the opening monologue happened because the five of them couldn’t agree on an opening.

“Its hard to know when you’re in the middle of it how it’s going. It’s hard to get five people to agree on anything. Every time we had one idea, we had two people who didn’t like it. Did it work? I don’t know. I’ll have to go back and watch it. According to Piven it clearly didn’t,” he said, according to The Hollywood Reporter, referencing Jeremy Piven’s backstage remarks.

If you missed that or the telecast, or just want to relive every (awkward) moment, you can catch up in the real-time commentary in my live blog of the event.