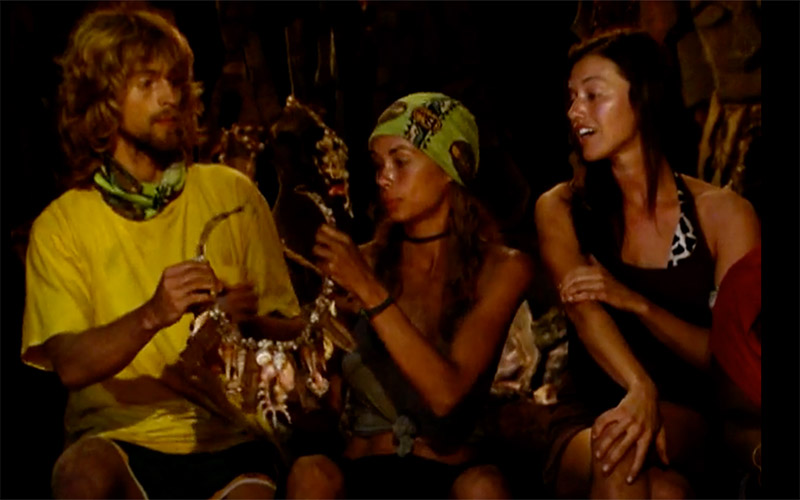 At just 22 years old, Erik Reichenbach has secured himself a place in reality TV history as “the dumbest Survivor ever,” as two contestants branded him last night, and also helped make Survivor Micronesia the best season ever–or at least, the best second half of a season ever.

Erik, who will undoubtedly need years of therapy to learn to trust people again, was played and betrayed by the four women, who actually convinced him to give up the individual immunity he won.

“I think that is what you call a life lesson,” Jeff Probst said as Erik left Tribal Council. Erik seemed to take it well, saying, “damn, damn, they got me. … Those damn girls.” He said he was not prepared for “surviving four crazy, sexy women.”

The plan was masterminded by Cirie, and it was executed flawlessly by all four women, although in two separate parts.

First, the three favorites realized they needed to keep Erik off Exile Island, so Amanda bonded with him, and convinced his naive ass to take her with him on the reward challenge if he won. She also convinced him that Natalie was a threat, so he sent Parvati to Exile Island instead (and she spent her time there tanning and relaxing, working hard to earn the $1 million). Those decisions irritated increasingly scary Natalie, which made her ripe to be used by the other women.

Later, after Erik won immunity, Cirie wondered if Erik could be convinced to give up his immunity necklace to Natalie to earn “redemption,” as he later said. Natalie told the other women, “Who would fall for that? I feel stupid listening to you guys. This is just ridiculous.” It was, but she tried anyway, and it worked.

The jury members could barely contain themselves at Tribal Council when Erik handed over his immunity to Natalie, ensuring that he’d join Ozzy and Jason (and, from last season, James) as immunity-holding evictees.

For the first time in my memory, we were shown all five votes as they were cast, meaning that Erik’s elimination wasn’t a surprise. The whole thing was unbelievable television and incredibly exciting, but the only truly shocking moment was when Erik handed over the immunity necklace.

We were in on the rest, so it wasn’t as much of a surprise as, say, Amanda playing the hidden immunity idol last week after pretending like she didn’t find it.

While it was good, it didn’t quite live up to your or my predictions of the “most shocking Tribal Council ever,” as CBS was promoting, and as we discussed on Facebook. (Thanks, by the way, for joining reality blurred on Facebook; you all are some attractive people. And if you want to have more Facebook fun, you can help to inflate my ego by becoming a fan of Andy Dehnart the writer, and keep up with stuff I write beyond these pages.)

Anyway, Brian from Michigan would get the prize if there was a prize, which tragically there is not, for guessing that “Someone gives up immunity and is subsequently voted out.” Bravo. But his fictional idea, playing off Top Model, would have been great, too: “Parvati gets voted out and acts like it’s no big deal. Jeff Probst, channeling Tyra Banks, goes into a rampage and begins screaming at her: ‘Did you know you had a possibility to win? Did you know all of America was rooting for you and you come in here and treat this like a joke?’ As Parvati protests, Jeff shouts, ‘Be quiet, Parvati! Be quiet! STOP IT! I have never in my life yelled at a girl like this!'”

And Jeff R. said Erik and Cirie would “announce that they have conceived the first ever ‘Survivor Child,'” which would have then been voted out. As to violence, Matthew from Australia was “hoping for some form of cannibalism.. especially if they eat eliza.. she is really annoying,” while Teri from Chicago suggested Amanda and Natalie would fight, “a shoving match ensues and someone falls into the fire.”

There were also some crossovers. Jeremy suggested that Survivor would be essentially revealed to be part of the Lost storyline, while Matthew G. said the show would channel American Idol, and Probst would tease the elimination but ultimately reveal everyone was safe.

That would be shocking, since the last thing anyone would expect is for Survivor to become as cheap and tawdy as Idol. After last night, nothing we’ve seen on reality TV this season can match the kind of human drama that Survivor offers.

Recommended for you: Why Erik gave up immunity on Survivor Fans vs. Favorites: seven players and two producers tell the full story